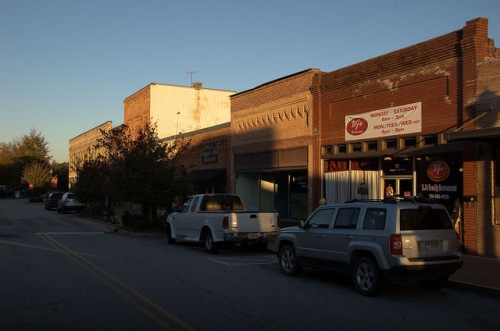 Sometimes called Toccoa’s Main Street, Doyle Street was once closed to vehicular traffic and covered with concrete canopies. The removal of these monstrosities was the beginning of a long-time revitalization plan which culminated in Toccoa being named one of the top 10 “Main Streets” in the nation. It’s an ongoing process and is very inspiring. (Travel Note: If you’re in Toccoa, don’t miss a breakfast or lunch at BJ’s Family Restaurant, seen on the far right above. I had the best breakfast I’ve ever eaten there, and the staff treats everyone like they’re locals). 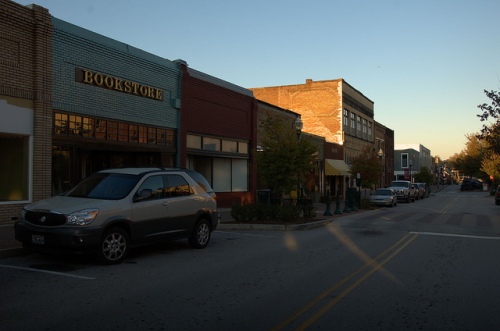 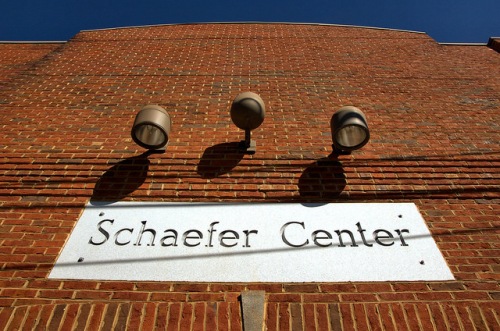 Now known as the Schaefer Center, the old Ritz Theatre operated from 1939 until 1985. I made a series of photographs for the Fox Theatre Institute in 2011 and 2012 when restoration was in progress and haven’t been back since it has reopened. The most glaring absence is the old marquee on the front of the structure, which I hope will soon be replaced, as it’s completely integral to the building’s appearance . I hope to visit again soon and share “after” photos. 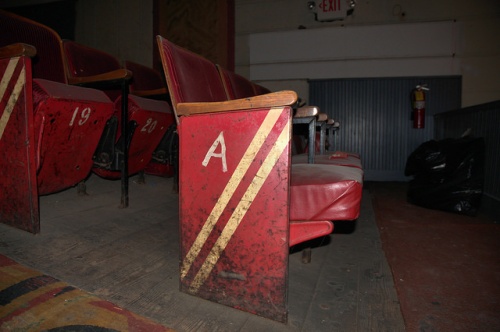 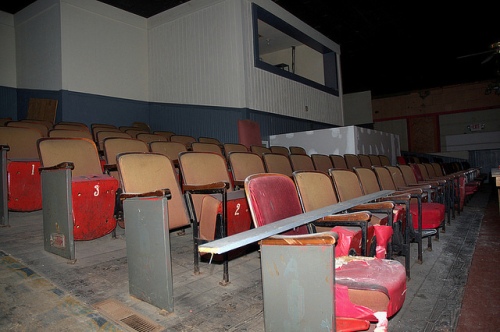 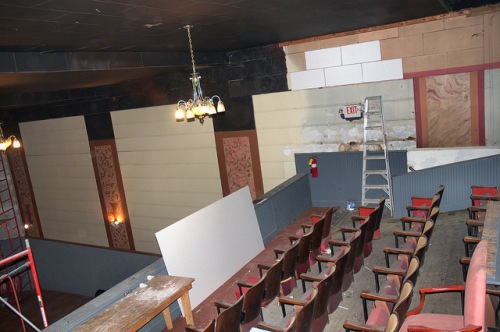 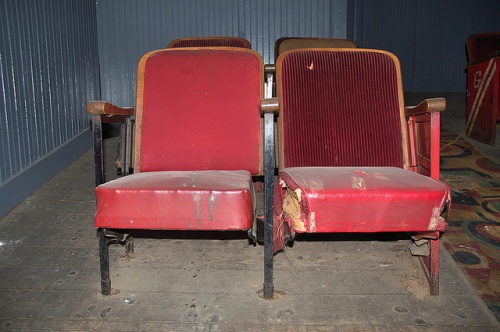 The mold seen above is about all that remains to indicate that this was once home to one of the biggest industries in town and the state’s leading manufacturer of caskets. They were also the largest supplier of caskets to the U. S. military until the Vietnam War.

The Toccoa Casket Company was an iconic local business throughout most of the 20th century and when I was in town photographing the Schaefer Center for the Fox Theatre Institute last year, local officials suggested I go out and make a few shots, as the place was abandoned and for sale. There was a good deal of vandalism at the site and I must admit it was just a bit creepy wandering around the abandoned factory buildings.

The Display Room was where different models of caskets were shown to potential buyers.

The work spaces of the old factory  are just a cluttered mess today. 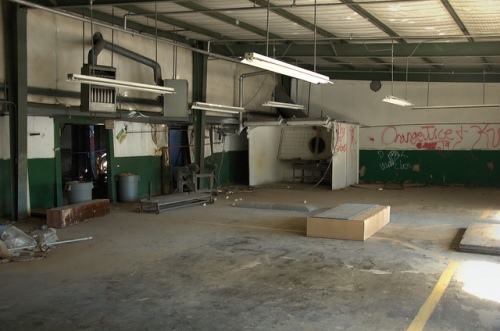 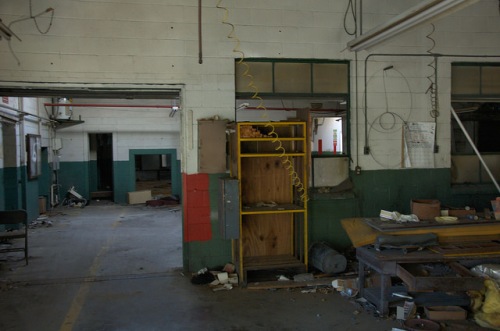 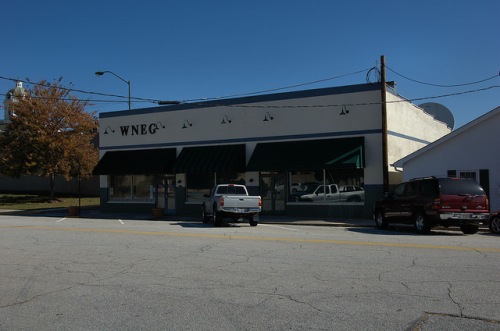 WNEG is a rarity these days. It’s an independent local broadcaster which dominates its community. Most radio today is generically syndicated with little or no connection to the community it serves, but not so with WNEG, which has been on the air since 1956. The NEG in the call letters stands for North East Georgia, of course.

This colorful depot, restored in 2005, is an Amtrak stop on the Crescent line. It’s also home to the Toccoa-Stephens County Chamber of Commerce, the Stephens County Historical Society, and the Currahee Military Museum. In regards to its multiple uses, it’s one of the best depot restorations in Georgia.

Beyond the tracks is a view of the foothills of the Blue Ridge Mountains. 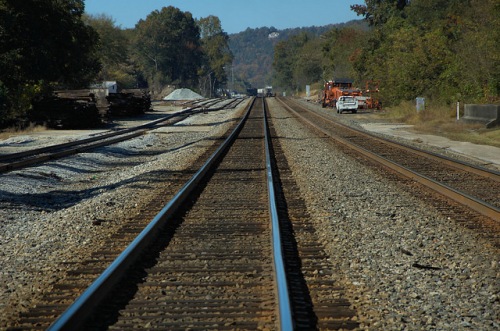 Just across from the courthouse, this landmark, also known as the Simmons-Bond House, is now a bed and breakfast. Designed by architect E. Levi Prater, it was later owned by the Julius B. Bond family.

Now renovated and used for county offices, the old courthouse is a focal point of Toccoa’s vibrant downtown. A newer courthouse stands across the street.

It’s a great structure from all angles. 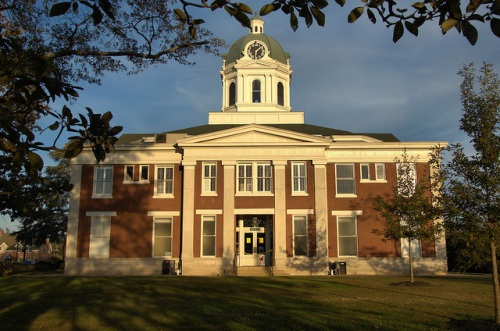 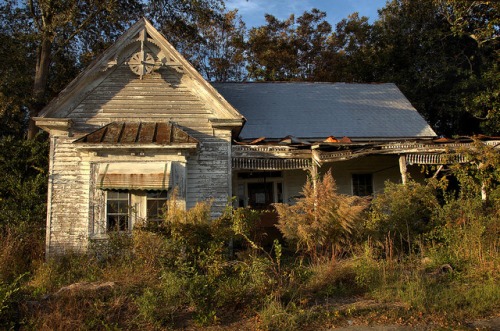 This house likely dates to circa 1884, as the adjacent house, built in that year, is a near twin. It is best known as the Bagwell House, for two maiden schoolteachers who lived here.

Update: This photo was made in 2011. The house was being deconstructed/remodeled in 2013 and may no longer be standing. 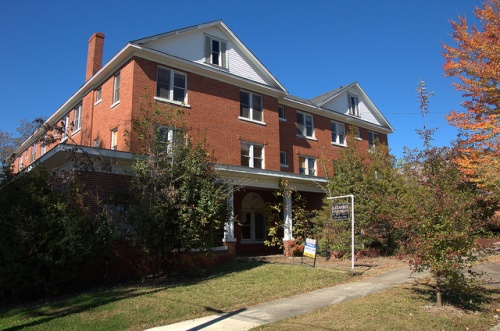 Originally built by a Mr. Green of Atlanta, who had Green’s Department Store on Doyle Street in downtown Toccoa, the Hotel Albermarle burned and was rebuilt sometime in the 1950s, retaining some of the original structure. For many years, it was known as the Alexander Apartments. There are presently plans to renovate it to its original state.