Known at its organization as Round Oak Methodist, and now called Sunshine Methodist or Sunshine II, the church seen here was organized sometime after the burning of a more primitive log structure known as Sunshine Church, which was a Baptist congregation.

That church was the site of the Battle of Sunshine Church (30-31 July 1864), one of the few Confederate victories in the Atlanta campaign. Stoneman’s raiders, attempting to meet up with Sherman’s forces, encountered three brigades commanded by Clinton native General Alfred Iverson. A decisive Confederate victory forced Stoneman’s surrender. Four months later, Sherman’s troops burned the old church as they passed through the area en route to Savannah.

Founded as Sylvania in 1807, Round Oak is one of the oldest settlements in Jones County. The name was changed to honor an ancient oak known as a gathering place for Native Americans. A depot was built in 1885 and brought a thriving economy which persisted until the early 1920s. The Big O Ranch, home of Otis Redding’s widow Zelda, is located on Otis Redding Road just outside town. 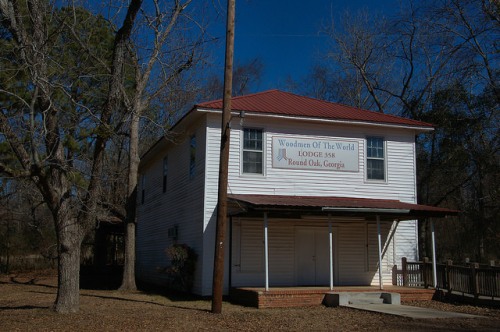 This was built as a general store by Joe White to replace the original which burned after a steam engine caught fire on the adjacent railroad tracks. It is best known today as Woodmen of the World Lodge 358. The lodge was organized around 1907 and likely occupied the upper floor of the store by the 1920s.

This was the home of Dr. Ben White, an area physician. A servants house is located behind the main house and all the structures on the property are endangered.

Hollis Jackson Store, Circa 1930, Round Oak 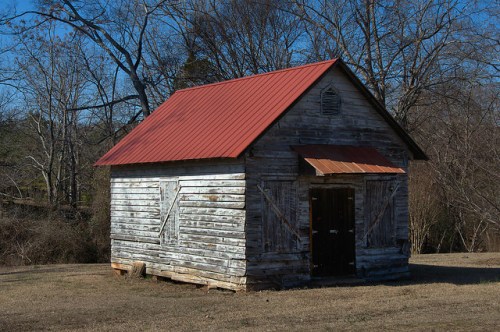 I believe this is the school built to replace one built in 1912 and deemed unsafe by 1923. According to Jones County Historian Carrie Williams it was built using material from the earlier structure and used until rural schools were consolidated in the county in 1946. I’m unsure if this was the school house or the auditorium.