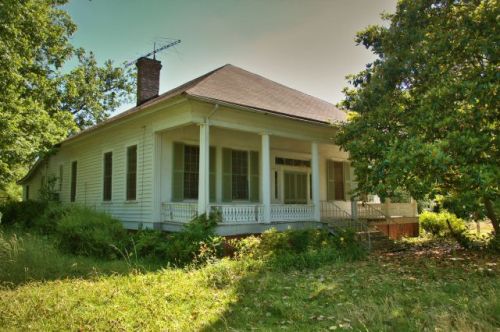 Built for John Thomas Blount, this Greek Revival cottage was later owned by the McCoy and Maxwell families. It became a focus of statewide attention when, on 5 April 1896, Emma Owen was shot and killed while visiting Jenny McCoy here. A local dentist, Dr. Will Ryder, had become enamored of Ms. Owen and had apparently been stalking her. At the time of the murder, Emma was sitting beside the front window of the home, in the company of her boyfriend, when Ryder fired shots into the parlor.  After committing the act, the doctor fled to his nearby office and attempted suicide, but was rescued by friends. He was later charged with murder but was lynched while awaiting sentencing. Blood stains from the murder are still visible on the wood floorboards and the house is widely believed to be haunted.