This house is perhaps the most enigmatic in Milledgeville, due largely to its present derelict appearance. [It’s apparently more stable than the grounds would suggest]. Built by Joseph Lane for Samuel Rockwell (1788-1842), the house has also been known over time as Beauvoir and the Governor Johnson House. Rockwell, a native of Albany, New York, first practiced law in Savannah before establishing a practice in Milledgeville around 1828. He served as Inspector of the 3rd Division during the Creek Indian War of 1836.

Among numerous owners throughout the history of the property, Governor Herschel Vespasian Johnson was perhaps its best known resident. As the commemorative slab of Georgia granite placed by the WPA and the UDC in 1936 notes, it was his summer home. Governor Johnson was notably the state’s most vocal opponent to secession but eventually came around, as borne out by the acquiescent quote, no doubt chosen by the UDC: “To Georgia, in my judgement, I owe primary allegiance.” 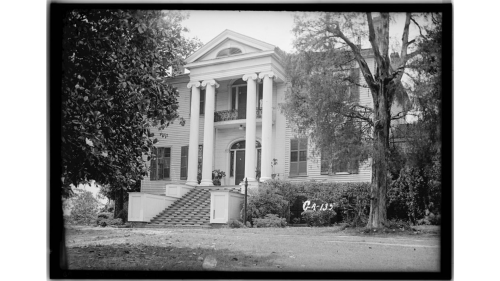 The house was documented by photographer L. D. Andrew for the Historic American Buildings Survey (HABS) in 1936, owned by the Ennis family at the time. Photo courtesy Library of Congress.

Thanks to Michael Massey for bringing this house to my attention.