I’m not sure when Moses Chapel was established but like most African-American churches in Reconstruction-era Georgia the congregation likely counted many recently emancipated slaves among its members. The church, built in 1877, is a real treasure of the vernacular Gothic style common in the late 19th and early 20th century. It is the most notable landmark of the historic African-American neighborhood known as Pea Ridge.

Though it has been remodeled several times over the years, this is the original church built in 1893.

This was built in the Queen Anne style after the Civil War and following a complete renovation in 1967, it became the Parish House for the Episcopal Church of the Advent, located next door. 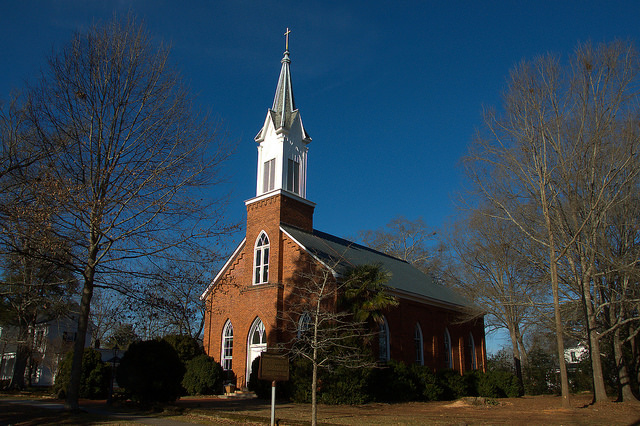 This chapel was built by the Methodists in 1844 and was acquired by the Episcopal diocese in 1961.

In 1846, the first Episcopal congregation was established in Madison. During the 1850s, they built a Greek Revival chapel which served them for over 80 years. The hardships of the Great Depression caused a significant loss in membership and the church was deconsecrated in 1937 and razed soon thereafter. The church was re-established in 1953.

Founded in 1807 as part of the Apalachee Circuit, Madison Methodist Church has been a part of this community since its founding. In 1849, the congregation had an active role in the founding of the Madison Female Institute, one of the oldest women’s colleges in the United States. The Institute was active until the Civil War. The present sanctuary, of the Akron plan so popular in the late-19th and early-20th centuries, was completed in 1914. Tiffany stained glass windows are among the most prominent decorative features. The congregation remains among the most active in Morgan County. 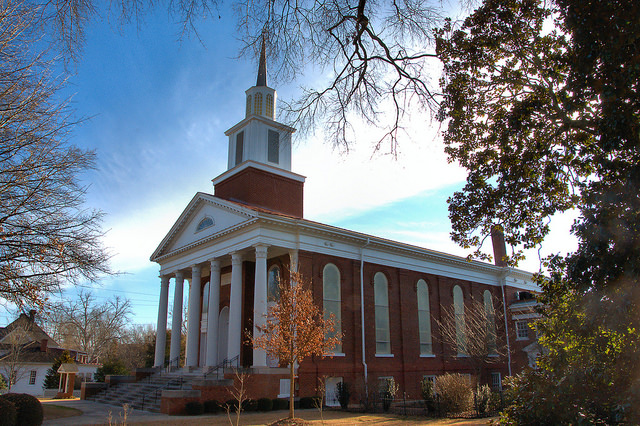 In a city of beautiful churches and homes, this is one of my absolute favorites. The congregation of Madison Presbyterian dates to 1821 and during their first 21 years they met at the court house and various local schools. Architect Daniel Killian was hired to design this beautiful sanctuary in 1842, and it remains largely unchanged today, a testament to the architect’s skill and the congregation’s appreciation of history.

The first Methodists met in a home in Apalachee. They built their first church around 1840 and it was known as Comfort. A new structure was completed around 1857 and the congregation changed its name to Philadelphia. I fine wooden church was built in 1903 and served until destroyed by fire on 13 April 1923. The present structure was built in 1925. 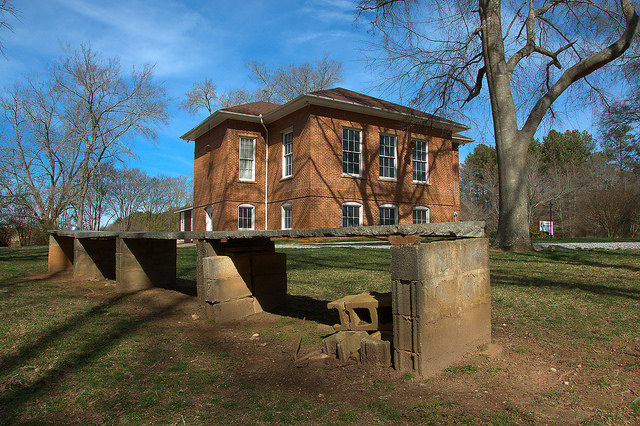 A slab-topped (likely Georgia in origin) table for dinners-on-the-ground is located behind the church, as well as this playhouse which I think is meant to represent Jonah’s whale. 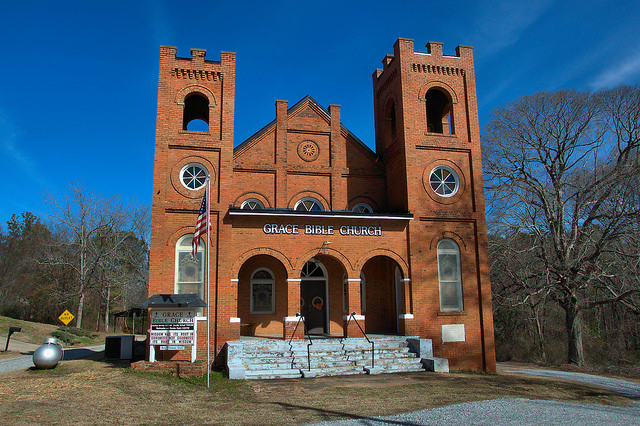 The cornerstone notes that Buckhead Methodist was founded in 1824, and that the building committee for this church included R. N. Pirkle, Chairman; H. M. McWhorter; A. J. S. Jackson; J. W. Wright; Mrs. Julia Shouse; and J. A. Mason. Lawrence W. Neff was the pastor at the time. This is now home to Grace Bible Church.

This beautiful church is essentially all that remains of the once-thriving Swords community. The J. B. Swords Distillery was an early manufacturer of whiskey, located here because of the dependable Blue Springs nearby. The town grew up around the distillery and was at its peak when the Georgia Railroad located a depot here in 1910. Prohibition wiped out the distillery in the 1920s and in the 1950s, the railroad removed the depot. The commercial center of Swords was destroyed by fire in the 1980s.