The remains of the once-thriving commercial center of Fortsonia are well-known landmarks to travelers on Georgia Highway 17.  Fortsonia is located in the southern part of Elbert County, in a larger area known as Flatwoods. A history of Fortsonia, written by Frank Fortson for the Fortsonia website, follows: Only when the railroad was built, and a railroad depot needed to be named for the adjacent community, was that community named Fortsonia…multiple, and conflicting, sources, [indicate that] the railroad built a depot on land in front of what is now Nancy Hart Nursing Center. The land was provided by George T. Fortson. George’s cousin, Frank B. Fortson, Sr., owned the property directly across Dr. George Ward Road from the depot. Frank provided the railroad a right of way through his property to the depot. Frank’s brother, George Haley Fortson, City Attorney for Seattle, Washington, volunteered for the Spanish-American War in the Philippine Islands. Captain Fortson was mortally wounded there. Various family and non-family sources attribute the naming of Fortsonia to each of the three men. The depot and community may well have been named for them all. The depot, and therefore the community, was first named Fortson, Georgia, by the railroad, most likely in 1912. Once they discovered there was already a Fortson, Georgia, NNE of Columbus, Georgia, the community was re-named Fortsonia, Georgia.

Here’s more history from Frank Fortson: “The northernmost Fortsonia store was a storage building for the original Hudson store. My grandfather and Baker Wyche’s grandfather ran that as a General Store at some point in the 1905-1913 period. The store was known as Fortson’s & Wyche. You can see an old photo of it on the http://fortsonia.org site and barely make out the name in the gable area. It shows several men, including the two proprietors, on the front porch, with my grandfather holding a long gun across his lap. Around 1913, when the Elberton & Eastern RR came through (and Fortsonia got its name), my grandfather built a store across the street, near the train depot. Years later the northernmost store became Gilmer Hudson’s Grocery. That store and the adjacent one (Clark Hudson’s General Store) were recently purchased by Ben (cousin) Fortson. Ben’s Dad, George H. Fortson, ran a General Store between Guy Bell’s and Clark Hudson’s. That store was demolished some years back.“ 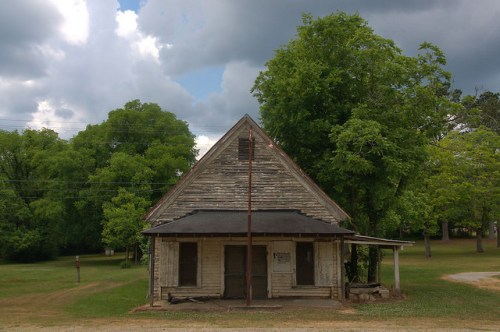 Frank Fortson shared this wonderful history: “[This was] Guy Bell’s Hardware Store. The original store was just the left section. Mr. Bell later added the smaller attached section on the right, which was used by various businesses over the years (laundromat, game room, craft store). The hardware store had, what appeared to be a LOT of items, to me as a kid. Everything from baseball gloves (where I bought two) to hardware, plus just about every needed item except groceries and gas. There were stairs in the center of the store about 2/3rds way back that took you to the furniture area. In that area, he sold couches, beds, dressers, etc. Mr. Bell and his store were very popular during its day. I can remember sitting on the front steps about age 10, drinking a cold Coke from his cooler, pouring peanuts into the Coke. I also remember when Mr. Bell started selling the larger (than 6 oz) Cokes, as the price went from 5 to 7 cents. I don’t know the build date for the store, but it existed before the mid 1940s.Jane (my first cousin) and John Coleman now own the store. It has been inactive for many years.Behind the store, in the early 1900s, my grandfather ran a sawmill (among other enterprises). I suspect that the wood used to construct the northernmost store [Gilmer’s Grocery] came from that sawmill.“