This circa 1817 I-house was part of a much larger plantation purchased by the Nolan family in the 1850s. It was home to the Nolan family before the more substantial structure was built at the crossroads circa 1905. It is not publicly accessible but visible from the right of way in winter.

Since this has no windows, I’ve ruled out identifying it as a tenant house; a tool house or corn crib wouldn’t have a chimney. Therefore, I’m presuming it’s a smokehouse. 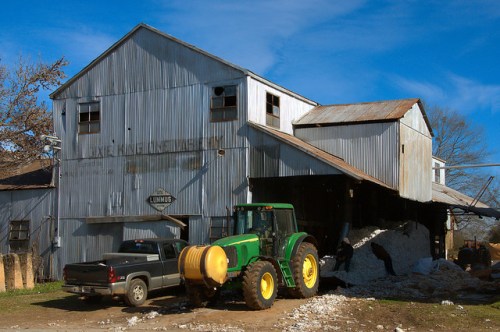 This is one of just a few working Lummus gins in Georgia. It’s such an integral part of life in this community that it’s the namesake of the annual Cotton Gin Festival, held the first Saturday in November. Bostwick is a fascinating place that I’d recommend anyone visiting when they’re in the area.

One of the best descriptions and general histories of Bostwick can be found at my friend Dagmar Nelson’s Southern Exposures blog: http://milkaway.blogspot.com/2009/07/bostwick-ga.html

This is Seed House No. 2, part of the extensive Bostwick Supply & Gin Company.

This large commercial block is symbolic of Bostwick’s agricultural prominence. The place is a step back in time. Unfortunately, structural collapse on the end of the Bostwick Supply Company, seen below, could threaten this view. 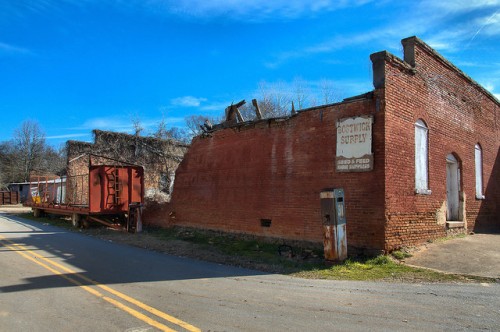 I hope an effort is made to stabilize this in some way, if possible.

Visit Bostwick’s website here, and visit in person if you get the chance: http://www.bostwickga.com/

Built by John Bostwick, Sr., to accommodate burgeoning railroad traffic in the area, the Susie Agnes remains the crown jewel of Bostwick. Mr. Bostwick had purchased a large tract of land in the area and, encouraged by rapid growth, divided a portion of it into lots which became the town bearing his name.

I waited five years to see this grand old home and wasn’t disappointed when I finally made my way here during the winter of 2015. Many of my fellow photographers have shot the interior; it wasn’t an option at the time of my visit, as the house is all boarded up now. Rumors swirl around this house as to its preservation status. I was led to believe that restoration of the property is imminent, though many have told me that this is always “in the works”. Whatever its future, it’s a tangible link to the plantation era in the Piedmont, when large numbers of laborers were required to support self-contained economies. The Nolan family worked this land (as much as 2000 acres) from about 1856 until 1970. A commissary and several outbuildings still dot the plantation grounds; some maintain that a slave cabin exists on the property, though this is apocryphal. The building in question is a tenant house with boards that are clearly not old enough to date to the antebellum era.

The first Nolan home in the area is still standing, as well, though not generally accessible to photographers. 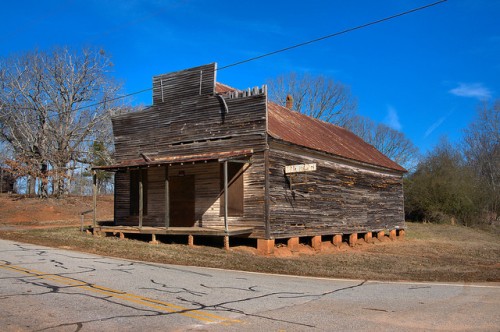 Like most true plantations of its era, the Nolan property supported its own commissary, which was essentially a credit-based store for employees. The building takes on the common rectangular box form of country stores at the turn of the last century; I’m not sure if the false front was added later, or if it was an original feature. 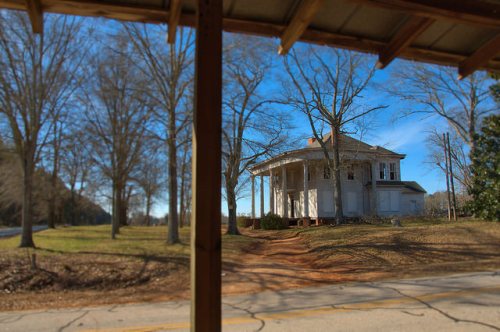 The view of the “big house” from the commissary is a reminder of the complete dependence workers had on the plantation economy. The store likely served the general public, as well, as the remnant name-plate of a Coca-Cola sign indicates.