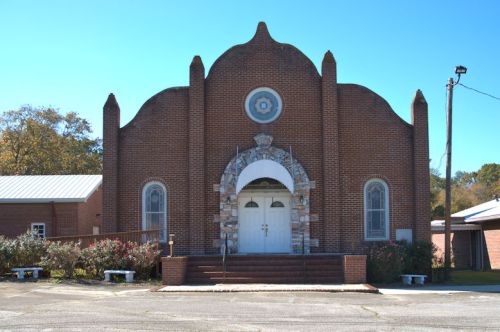 Yorkville Baptist Church was established in 1866. The present structure was built in 1945. The history of the church has strong connections to the York family. In the 1820s, Josiah York, a native of Washington County, Tennessee, and his wife Sarah, settled this area, which was on the border of the Creek and Cherokee nations. The York [and Philpot] family was associated with the notorious “Pony Club” which stole horses and operated out of the reach of local law enforcement, which was nearly nonexistent at the time. York served as Justice of the Peace on several occasions between the 1830s and 1870s. He also served as Yorkville postmaster for a time. The land for both churches, the Baptist and Methodist, were donated by Josiah York’s son, Abraham “Hud” York.