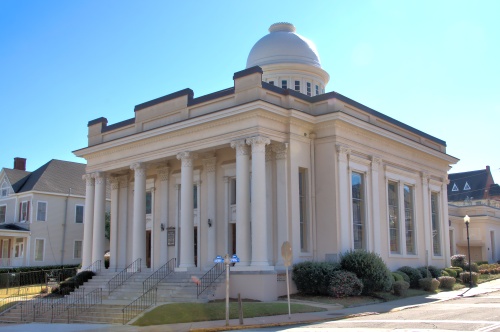 Though there was surely a Jewish presence in Macon from its earliest days, evidenced in the old Hebrew Cemetery at Rose Hill, the beginnings of a permanent congregation can be traced to a group known as “The Eleven”, who met in 1859 to organize the “Israelitish community”. The Eleven were: E. Einstein, R. Einstein, E. Isaacs, E. Brown, H. Goodman, M. Landauer. S. Landauer, I. Weill, E. Feuchtwanger, I. Hershfield, and A. Dessau. The German Orthodox congregation was first known as the House of Israel, Kahal Kodesh Beth Israel. Reverend H. Lowenthal was the first leader of the congregation and the first official synagogue was located above Horn’s Confectionery on Cherry Street. The congregation built their own synagogue in the early 1870s, which was demolished circa 1902. The present synagogue was completed during that year.