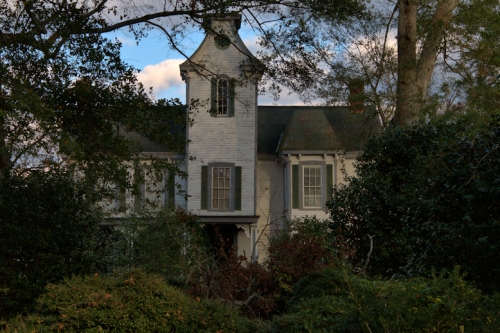 This house has intrigued me ever since I first “discovered” it on the cover of John Linley’s The Architecture of Middle Georgia: The Oconee Area many years ago. Linley was able to get a better photograph, as the front yard was less overgrown at the time, but it still looks great.

It was built in the Greek Revival style by Tunis Tunison, who with James Morrison Broadfield built Temperance Hall, the first two-story brick structure in Eatonton, in 1849. Tunison lost the house to William Paschal in a sherrif’s sale around 1860. It’s unclear when the front tower was added, but some sources suggest as early as 1858; others suggest the 1870s. I’m still not even sure as to the provenance of ownership, which varies greatly in sources.

2 responses to “Tunison-Paschal-Sammons House, Circa 1855, Eatonton”