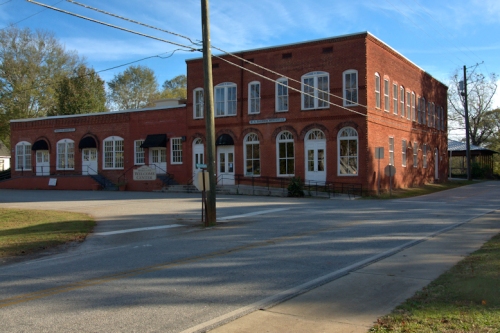 The two-story building on the right was the W. A. Brannon Mercantile, built in 1894 by R. D. Cole of Newnan. On the left is the Moreland Knitting Mill, built in 1904 as a cotton warehouse. An alley originally separated the two buildings but they were connected by the middle building (with square canopy) in 1937. Brannon sold the old warehouse for use as a knitting mill in 1920, which was originally known as Moreland Hosiery Mills (1920-1927) and later operated as Moreland Knitting Mills (1927-1968).