On my numerous trips to Athens, I always pass Hot Thomas Bar-B-Que and bemoan the fact that it’s not open. Numerous friends have told me I have to eat here, but I’m either here on Monday, when it’s closed, or pass through too late to sample their barbeque. They’re open from 10-2. Recently, I was determined to at least get a photograph of the place and while I was here shooting, owner Mark Thomas stopped by and graciously shared some of its history with me. He’s a really likeable guy and you can tell he puts a lot of himself into this business. He noted that the building was constructed about 1948 and first used as a general store. But the Thomas family has been on the property since at least the mid-1800s, when they opened a cotton gin here. They ginned cotton into the 1970s; the old Continental gin is an event space today. A farmhouse, tenant housing, barns, and other historic structures also remain on the property. They weren’t moved here to make the place look more authentic; they’ve always been here. 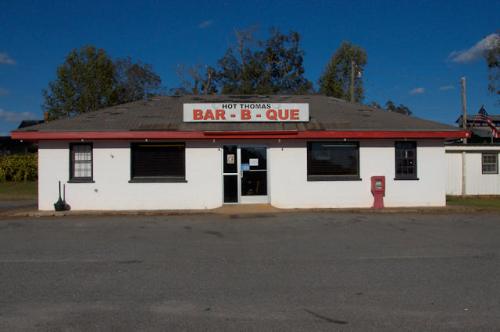 Mark’s late father, Carl Howard “Hot” Thomas (1935-2011), who started the business, was really a jack-of-all-trades, a farmer and entrepreneur who raised cattle, hogs, and turkeys, row-cropped, grew and ginned cotton. He also owned a large peach orchard until a hard freeze finished it off years ago. But he was best known for his barbeque restaurant, simply known as “Hot’s” to locals.

The day after meeting Mark I raced from a photo shoot in Jefferson back down to Watkinsville so I could finally see what all the fuss was about. I wasn’t disappointed. The place was packed with locals, from white collar bankers and lawyers to blue collar laborers in work clothes. That was the first good sign. And the interior walls are lined with shelves from the building’s days as a general store. Hot’s collection of old bottles and other treasures shares the walls with dozens of loaves of Sunbeam and Wonder bread. I guess some people have a preference. One of their most popular items is chicken mull, which I haven’t tried but is described as a sort of chicken pot pie in stew form. I opted for the barbeque plate with the vinegar sauce (a lot of people prefer the ketchup-based sauce and I’ll try it next time) and my prerequisite sides of Brunswick stew and slaw, complimented by some really good (and really sweet) tea.  It’s an indulgence reserved for road trips. And a good day trip if you’re nearby would include a mandatory visit to the nearby Elder Mill Bridge.