Celebrating its bicentennial this year, Mt. Zion is one of Georgia’s most beloved and most visited churches. Organized in 1813, the congregation raised $700 to complete this structure. Services were held here until 1903 when the membership had dwindled from 130 to less than 10. The trustees of Mt. Zion Methodist Church purchased the property that year and used the structure for services until 1958.

A Georgia Historical Commission Marker placed in 1966 gives insight into the early history of the church and its most famous member: Nathan S.S. Beman at Mt. Zion (Nov. 26, 1785 – Aug. 6, 1871) Nathan Sidney Smith Beman, Presbyterian minister, educator, editor, college president, after graduating from Middlebury College, Vermont, taught and preached in New England until 1812, when he came with his wife to Georgia to regain his health. “A man of intelligence and almost boundless energy,” Nathan Beman found unusual opportunities in Georgia where wealthy planters were banding together to establish centers of religious instruction and education for their children. In late 1812, Beman became teacher and pastor at Mt. Zion, an academy town founded by Hancock County planters in 1811. Some of the State’s leading families supported Mt. Zion Academy which became one of the most celebrated schools in Georgia. The outstanding men Beman attracted to teach contributed much to the state in educational and religious leadership. Offered the presidency of the University of Georgia, Beman accepted reluctantly and temporarily, resigning because of his wife’s illness and death in 1819. He continued to direct the Academy, to preach, and to edit The Missionary, a weekly gospel newspaper. In 1821 he married Mrs. Caroline Bird Yancey, mother of secessionist William Lowndes Yancey. In 1823, Nathan Beman and his wife moved to Troy, N.Y., where he continued his ministerial and clerical career. 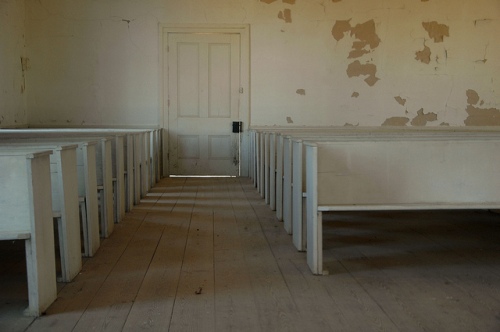 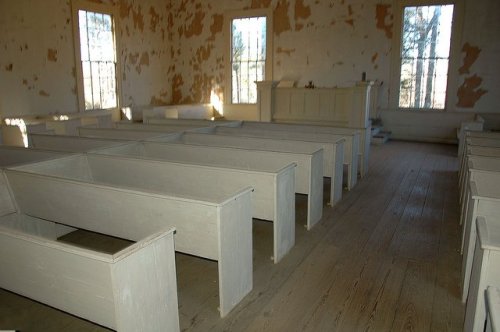 Today, it’s a haven for photographers and students of history and many leave messages and photographs on the pulpit when they visit, as seen below.